There are four schools of thought on what our schools should be doing today.  These can be summarized as follows:

Most of us who are not educators by profession might see each of the four as having some merit.    But most of the different schools of thought emphasize and elevate one of the four goals above the other three.

“No child left behind,” “Race to the Top”  and “Common Core” advocates tend to emphasize Knowledge as the primary goal for our schools, and this is reflected in the emphasis on standardized tests, which mostly measure knowledge acquisition. What does success look like, according the Knowledge advocates? Success is 100% of students passing knowledge exams like PSSAs and Keystones.

Companies and employers tend to emphasize vocational and technical Skills.  According to this point of view, ultimately every graduate will need a job, and our schools should equip each student with the skills that employers want. Surveys of company human resource departments continue to show that our educational system does not produce sufficient numbers of graduates with the skills employers are looking for, including critical thinking, written and verbal communication skills, and facility with technology. According to this vision for schools, our education system should focus more on vocational training and align its curriculum around skills that are in high demand by employers. Schools should function as the training department for our corporations.

Those who emphasize Values point to the benefit of creating social cohesion and national unity through our public schools. If we don’t have shared values, common aspirations, and a sense of common history, our country could become Balkanized and fall apart as a nation. Others emphasize the importance of character, stating that it is not good for society to have smart kids who do not use their talents for the greater good.

Some , following ideas first articulated by John Dewey, go even further and see schools not as an institution that should sustain old values, but as a vehicle to drive social change. Schools should raise awareness of injustices and motivate students to change the prevailing social system that produced those injustices. Social ills to be corrected obviously depend on who is offering the social critique, but the Dewey school is most often associated with modern day Progressives, and their program of education might try to address the perceived ills of economic inequality, racism, sexism, and in some cases even capitalism, corporatism, and American imperialism.

Other values advocates take almost the opposite point of view, and see schools as a good place to reinforce traditional values, especially religious values. The fact that public schools are precluded by 20th century case law from advocating for a specific religious viewpoint drives families with this view into the arms of parochial schools, private schools with a religious heritage, or home schooling, where the parents values and beliefs can be more fully presented, discussed and taken in by the student.

So advocates from all sides have tended to see schools as a place to advance a specific set of values. Unfortunately,  Progressives, Conservatives, Libertarians, and [name your own group here] have different opinions about which, if any, values should be presented in the classroom.  This conflict has played out in the so-called ‘culture wars’ over things like prayer in school, contraception and abortion, the pledge of allegiance, environmentalism, intelligent design vs. evolution, and observance of religious holidays.

The Fourth outcome, Self-actualization and discovery also comes from the Dewey school, and tends (in its modern form) to advocate less emphasis on grades and academic performance, and gives more emphasis to students exploring  a diverse curriculum, learning more about themselves and who they are, and discovering their interests and aptitudes. This is best done by having a large variety of academic and co-curricular experiences available, and having a student-centered learning process that drives what the curriculum looks like.

So, which of these four objectives are most important?

As a parent, I want our schools to act and deliver in all four areas.   I want my own children to pursue academic knowledge, develop practical skills, understand our values, and to discover their strengths and interests.   But this is not the exclusive territory of our schools — this growth happens at home, at church, in the community, with our extended family, and at school.  Schools are the partners of parents.  Parents are responsible for the growth and development of their children, and schools are ‘contracted’ to play an important role.

In each of the four areas (Knowledge, Skills, Values, and Self-actualization) the school may play a larger or smaller supporting role.   For my kids, I see the relative contribution of each as shown below: 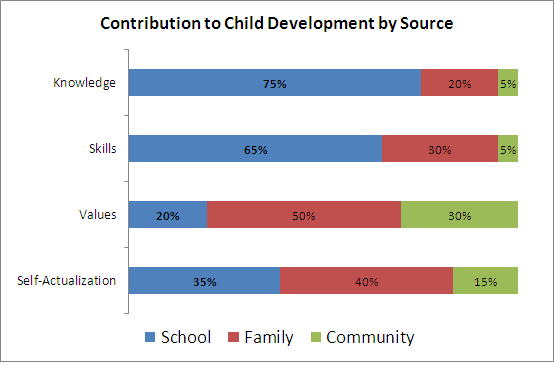 When it comes to Knowledge acquisition, this is undoubtedly an area where the school plays a dominant role.  The school defines the learning objectives, provides the curriculum, delivers the curriculum, and helps children achieve proficiency.  While parental support is a major influence on academic achievement, our schools are in the driver’s seat.

Skill acquisition is a similar story, although I think parental influence is a bit stronger than in Knowledge acquisition.  Where will our children learn presentation skills?  Where will they learn to work in teams?  Where will they develop the ability to think critically?   Most of this will happen in our schools.  However, there is clear overlap with parenting … don’t we model for our kids how to think critically?  Don’t we give them frequent instruction on how to get along with peers, siblings, and relate to adults?   And for certain skills (like using technology) many of our kids learn much more at home that they do in school.  Nevertheless, I want schools to provide skill training, and I think there is little controversy about the skill-building that our schools provide.

When it comes to Values, I think the discussion quickly gets complex.  Transmission of values in some areas (e.g. American citizenship, democratic capitalism, human rights, sportsmanship) seems appropriate for our schools, but the conversation quickly becomes uncomfortable when we start talking about schools promoting particular points of view on religion, or even on topics that some claim are ‘moral imperatives’ like environmentalism, income redistribution, racism, and undoing historical imperialsim.    Do we really want our schools wading into these controversies and promoting particular points of view?

I think that most of us, even those of us who consider themselves people of faith, are comfortable with schools staying on the sidelines on religion and likewise staying out of the political topics that animate some our national political debates.   While it means that most of the values that are promoted in school will be somewhat bland, I think that is an acceptable trade off.

Schools can and should promote growth and self-actualization, but I think this is done by presenting a wide set of opportunities for children to explore (with parental guidance).  While some may question the value of “non-academic” subjects like art, theater, or sports, some of our kids will find their niche in those areas.  And it is useful to our kids to discover what they are not interested in, too.   Schools ought to provide opportunities, both curricular, co-curricular, and extra-curricular for our kids to explore and discover their talents.  But the conversations about a child’s interests, talents, passion, and capabilities is very much a parent-driven conversation.  Who knows a child better than the parents?  So I see the school as a place where exploration can happen, but the development of a child’s self-perception and path in life is very much an inside-the-family conversation.

This mix would,  of course, be different for each family.  And it probably also changes as kids grow and mature from age 5 (more done at  home) to age 17 (more done at school).

So I offer my own target mix not to prescribe a solution for others, but instead to make the point that we have many expectations of our schools in terms of outcomes, but some are more important to us than others.   And if our schools focus equally on all four areas, we probably dilute our efforts, spend more money, and perhaps do not serve the most important needs of the community — pursuit of academic knowledge.

That’s my opinion — what’s yours?  Tomorrow I will put up a survey for my readers to (anonymously) cast their votes.