Retirement plans are an important part of total compensation for UCF teachers.  In today’s post we will look at the pension benefit teachers can earn their career.

Unlike the other benefits we looked at in my previous posts, access to the pension benefit does not come through the UCF Collective Bargaining Agreement.   Rather, the teacher pension benefit is set by state law, and all teachers and school districts must participate in the system.

The pension system in Pennsylvania is called PSERS — the Public School Employee’s Retirement System. I wrote extensively on PSERs in the early days of this blog.  Please read those posts first, as I am going to assume that my readers understand pension math in general as well as the contribution and benefit calculations of PSERS.

Pension plans are becoming harder and harder to find in the work place.  In the last 30 years, the percent of all U.S. wage earners covered by a pension (defined benefit) plan has been cut almost in half, from 38% in 1980 to 20% in 2008.  In the same time period, wage earners covered by defined contribution plans, like 401(k)s, has increased from 8% to 31%.

The trends in the private sector alone are even more dramatic, with participation in pension plans dropping by 90% in the last 32 years. There are many reasons for this shift away from pensions.  The two biggest reasons are that pension plans are expensive for companies, and the accounting rules and regulations surrounding pension plans generate volatility in company earnings, which make them unattractive to publicly-traded companies.  (For more see SSA study here.) 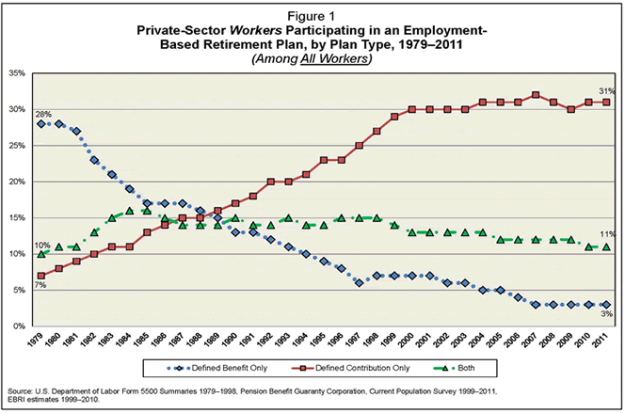 My employer, like many large blue chip companies, closed its pension plan to new participants 14 years ago. Newer generations of employees, including me, have been placed into 401(k) plans instead.  But those long-service employees grandfathered into the pension plan are envied by their colleagues!

In the public sector, pensions remain the norm.  In 2005, 98% of public sector employees with a retirement plan had a defined benefit pension, according to info provided by the PSEA.

Is it better to have a pension plan or defined contribution plan?   It depends on your needs, of course.  The main advantages of each plan are:

For most employees, defined benefit pension plans are usually more desirable, especially for those who:

What makes PSERS a particularly great plan for its participants is the multiplier.  Private sector pension plans (where they still exist) have an average multiplier of 1.8.  PSERS has a multiplier for new participants of 2.0, and for grandfathered participants, 2.5.  This makes for a much better payout, and a significant increase in the annuity value.

Wealth accumulation under PSERS tends to be greater than what can be achieved under a 401(k) plan funded with the same periodic investments.  While the results of any analysis are highly dependent on risk-adjusted rate of return assumptions, I estimate that employees starting their career with salaries of $50,000 (like UCF teachers) will end up with 20% – 50% greater assets at retirement under a pension plan than under a 401(k) plan, even with a decent employer match of the employees 401(k) contributions.

We should probably look at the downside of PSERS as well.  It is not a good system for teachers who are mobile, or who will spend less than 10 years in the profession.  For new PSERS participants, 10 years of service must be completed in order to vest in the plan.  If a teacher leaves the state or the profession prior to vesting, he is not entitled to any retirement benefits under the plan.  All of the amounts paid in by the teacher are refunded, with interest.   While it is good that teacher contributions are refunded, we should note that the employer/state contributions are not cashed out and given to the teacher.  So clearly there is a benefit foregone when a teacher leaves the system prior to vesting.  It also leaves these shorter-term teachers without the security and stability of a pension.

Overall, PSERS is a great benefit for classroom teachers, and is financially superior in most ways to 401(k) plans.  But the system works best for those who will have a long career as a public school teacher in Pennsylvania.